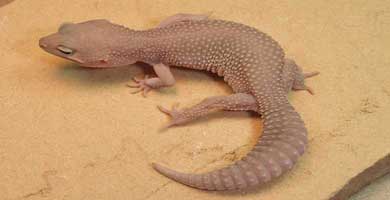 Blizzard gecko variants lack patterns and instead show a solid color throughout their body. Blizzards are usually white or yellow. Darker colored blizzards are sometimes called midnight blizzards. The Blizzard morph, discovered by Jay Villa of Prehistoric Pets in 1995, is very similar to the Murphy Patternless morph. Like the Murphy Patternless morph, the Blizzard morph is a simple recessive morph. 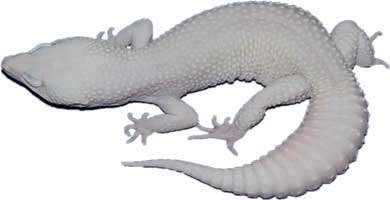 Blazing Blizzard is blizzard morphs that have been crossed with albino morph varieties. So far, breeders have been successful in creating variants such as Rainwater and Tremper Blazing Blizzards.

Still, under development, the Blazing Banana Blizzard combines Blizzard, Patternless, and Albino traits. The eyes must resemble the Albino type they are bred from, and the body must show features consistent with the morphology of the Patternless.

Blizzards are a striking gecko on their own but are also used extensively in breeding programs as a base morph. Their light coloration and lack of pattern make an excellent pallet to combine other morphs into.