If you want to know which are the steps to follow when you are reproducing Leopard Geckos, keep reading. In this article we will tell you everything related to the leopard gecko breeding.

How old do leopard geckos have to be to be sexed?

Wait until your leopard gecko is at least six months old or reach 5-6 inches long before sexing them. It is at that time that the sex organs are fully formed and can observe without invasive inspection.

How do you tell if your leopard gecko is a male or female?

Male leopard geckos have a very distinct v-shaped row in front of their vent, called pre-anal pores. It is the opening that the fecal matter comes out of. Females have a similar row of very small pores but they are barely noticeable.

Male leopard geckos have two distinct bulges behind their vent on both sides of the base of the tail. This is where the male reproductive organs are located. Theses bulges house two penises inside the sides of the tail and pop out on either side of the vent during breeding. 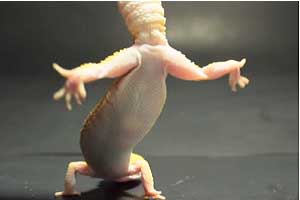 The females are sexually mature when they reach 45 grams and have reached 10 months of age. But for health reasons, it is convenient to wait until they reach 60 grams and at least one year of age. The ovulation and egg-laying process require a considerable expenditure of calcium and other nutrients that can wear out the female and interrupt the correct development of the female leopard gecko.

Arrived at sexual maturity, the females begin to ovulate, this is easy to notice if they observe the belly of the female. There you can see the eggs in the form of white ovals. This would be a good time for mating, otherwise, the eggs would become infertile and become corrupted after a few days with the appearance of fungi.

Male leopard geckos reach sexual maturity around 6-8 months of age. The males are very territorial and it is necessary to separate them once sexed. Otherwise, they will start fighting each other, causing injuries and even death.
The males usually reach a bigger body mass and a larger size than the female. This adaptation facilitates mating. That is why in captivity it is always advisable to mate geckos where the males are superior in size and weight to the female, allowing to mating without risk of being attacked by the female.

The leopard geckos in their natural state reproduce by seasons, specifically to the spring. This is a great advantage for breeders because it allows them to “program” their reptiles to mate after a cooling period. The cooldown is not mandatory for a good mating but there are several reasons for this:

In the cooling period, we lower the temperature to 65 F for one or two months. After this period the females are suitable to mate.

If you are a hobbyist and your female and male live in the same terrarium you should separate them one or two weeks before copulation. If you are a breeder, you can have up to 4 females in a 20-gallon tank.
This place has a hiding box that works both as a Laying box / Moist hide, a dish with clean water all the time, and the food bowl provided with a mixture of vitamins and minerals.

Building a Laying box / Moist hide is very simple. We will take a plastic container that has a lid, preferably it is not transparent and we will make a hole approximately 2.5 to 3 inches in diameter. this guarantees that the females can enter and leave easily. To choose its dimensions we must take into account how many breeding females we want to host. If you only have one female, an 8 “x 6” x 4 “plastic container will be more than enough for the female to move comfortably.
If we have females, we will require more space. The tank must be at least 20 gallons and the box of putting a little bigger than the previous one. (fig 1.)
In the construction of the box of putting there are two details that we should take care of.

A male can successfully breed 6 to 8 females. It is convenient to have separated the male from the females and then move it to the tank of the females.
The pairing is quick and simple. The behavior of the male is evident. Start by exploring the environment and then do one of the females. It will begin to bite gently as it moves its tail energetically. then, if the female is receptive, they will go on to copulate. It is advisable to leave them for approximately 2 hours. Although it is rare, fighting cases can occur, so mating should always be supervised. This process can be repeated on alternate days for a week. After this, in theory, the eggs will be fertilized

Approximately 4 weeks after mating, the female will lay her first eggs. Each egg-laying usually consists of 1-2 oval white eggs. As a general rule, the leopard gecko female lays 8 pairs of eggs per year at intervals of 2 to 4 weeks.

After putting them, the eggs should be removed and placed into an incubator. You must be careful to do not to rotate the eggs and identify the date and parents to follow up on the offspring. Once placed in their respective incubator tray, they are deposited inside the incubator, uncovering twice a week to allow air circulation and embryo respiration. Leopard gecko eggs depend on the temperature of the sex. This means that you can decide which sexual baby you want by simply incubating at a certain temperature.

The eggs hatch in 30-105 days. Males generally hatch faster due to higher temperatures.
Females take longer due to colder temperatures. On average, incubation for females lasts about 60 days and males around 35 days

You do not need to intervene as the eggs start hatching. Gecko eggs do not take long to hatch so when it happens, leave the newborn babies in the incubator for 12 hours. Newborns need to adapt to the environment and the people around them. They will be very scared and may stress and lose their tails.

After 12 hours, transfer the newborns to their new surroundings. Take them carefully, always by the body, never by the tail. If you prefer to wear soft gloves, the pups may resist being caught and sample a bit, as well as shrieking. all this is completely normal.

Regarding the feeding of newborns, wait at least three days to feed them. That’s right, always have the water at your fingertips. After the third day, the babies must have become familiar with their surroundings and will be receptive to feeding. A good option is to give them small crickets, no bigger than the head of the little gecko. In the beginning, the newborn will only eat one cricket per meal, feeding them daily. As you grow your appetite will increase.