The giant-sized leopard geckos are divided into two classes called Giant and Super Giant. In the Giant class, the males reach 80-110 grams and the females 60-90 grams per year of age. This being their typical size for the Eterozygotes.

It should be noted that these giants can appear in any phase, pattern or color. Unless both Super Giant parents are used, there is no visible way to distinguish a Giant from a Super Giant until 10-12 months of age.

The Giant morph was developed by Ron Tremper in 1999. The event was a surprise and it was not until a little less than the first year of age that the male juvenile, the product of crossing two normal leopard geckos showed signs of mutation. This specimen reached a length of 11 inches at 10 months, after which it did not grow anymore. Ron Tremper decided to check if the giant’s trait was a new mutation. For this, he employed albino females in the hope of obtaining heterozygous offspring that gave giant trait signals. His tests were successful on the first attempt, giving rise to the first albino giant. Later it demonstrated the presence of a co-dominant or at least incomplete dominant gene for giant morphs. 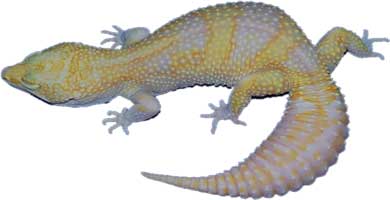 The second part of the test was to match the giant albino with sisters of normal type. Product of this union was given to a group of females that by their size did not indicate that they were giants, which were crossed with the original giant, resulting in the first generation of super-giant.

The care of a giant leopard gecko is exactly the same as one of the normal sizes. Except for food of course. These reptiles, being larger than their heterozygous versions, need a higher intake of nutrients, vitamins, and minerals. The criterion of increasing the diet from 20 to 30 % is advised. That if, always observing the behavior of the animal. Especially the thickness of the tail. If this thickness is a sign of overfeeding and if it begins to reduce, it is necessary to increase the intake of nutrients.