The Wild leopard gecko, also known as normal or nominal, is a reptile native to Iran, Pakistan, and India. In its natural state, it inhabits desert areas, feeding insects and hiding in cracks and even under the sand. Their movements are slow and their activity mainly nocturnal.

What are the wild leopard gecko main characteristics?

Its physical appearance is of a robust animal. With a size of 7 to 9 inches and a weight between 80 and 90 gr. In the case of the wild leopard gecko, its body presents a yellowish-yellow coloration, tinged with abundant black or brown spots. The male of the species tends to be larger and very territorial, which leads to fights between males for the territory and the right to mate with the females that inhabit it.
This appearance is given by a strong genetic load, which makes practically all the descendants of normal leopard geckos resemble their parents. Hence the abundance of these animals in their natural habitat, as in captivity, which makes their price in the pet market is not very high, approximately 20 to 30 USD.
This does not mean that a wild leopard gecko is a bad choice as a pet, quite the opposite. If you have never had a reptile as a pet, a normal gecko leopard is your best option.
After the wild leopard gecko was adopted as a pet, its breeders began to reproduce it using selective crossover between members of the same litter, seeking to select the reptiles that showed the most intense yellow color and a smaller proportion of dark spots. From those crosses came the high yellow. 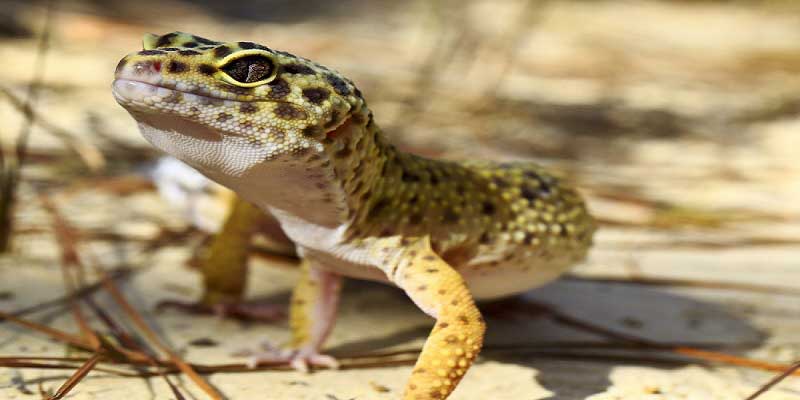 This Leopard Gecko is bright yellow with far fewer dark spots than the wild leopard gecko. This is the only difference that distinguishes them, maintaining similarity in all the other characteristics. Apart from this, its size and average weight are similar to that of any other morph except for the giant leopard gecko and super-giant leopard gecko phases.
They share the dominant genetic material. Breeders cross members of the same trait (line breeding). They procure to magnify the presence and brightness of the yellow color and the diminution of the black spots in the offspring. This is the base for the choice of new phases, some of them free of spots such as blizzard.
Both wild and high yellow are anatomically the same as any other leopard gecko. They have the same diet, water supply, temperature range, and housing requirements.