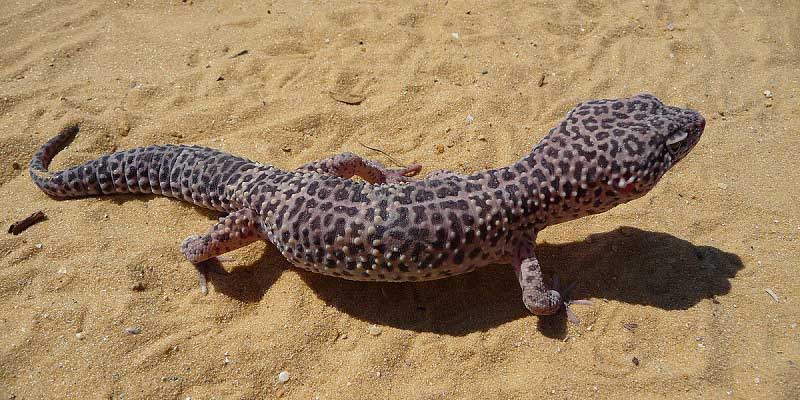 The Wild leopard gecko, also known as normal or nominal, is a reptile native to Iran, Pakistan, and India. In its natural state, it inhabits desert areas, feeding insects and hiding in cracks and even under the sand. Their movements are slow and their activity mainly nocturnal.

Its physical appearance is of a robust animal. With a size of 7 to 9 inches and a weight between 80 and 90 gr. In the case of the wild leopard gecko, its body presents a yellowish-yellow coloration, tinged with abundant black or brown spots. The male of the species tends to be larger and very territorial, which leads to fights between males for the territory and the right to mate with the females that inhabit it.

This appearance is given by a strong genetic load, which makes practically all the descendants of normal leopard geckos resemble their parents, hence the abundance of these animals in their natural habitat, as in captivity, which makes their price in the pet market is not very high, approximately 20 to 30 USD.
This does not mean that a wild leopard gecko is a bad choice as a pet, quite the opposite. If you have never had a reptile as a pet, a normal gecko leopard is your best option.

This, like all members of the family Eublepharis macularius, have a high life expectancy that is around 8 to 10 years old although with the proper care and feeding they easily reach 15 years of life. Males tend to be more long-lived than females, perhaps this is due to the wear they are subjected to when laying their eggs.